Today, June 21st, marks the 3 year anniversary of this blog. 3 years! What started out as an experiment for 21 days (starting on the 21st of the month -- no coinky-dink) has turned into 1095 days. Who knew then that starting this blog and starting this experiment with running would lead to so much in my life? I certainly didn't.

So, in honor of the blogoversary, I am taking you on trip down memory lane: Buckle up; it's a long one.

When I started this blog, Jerry and I had just bought our condo and we were about month into renovations that would end up taking us two years to complete. So when I first began this blog, I was living in a condo that pretty much looked like this: 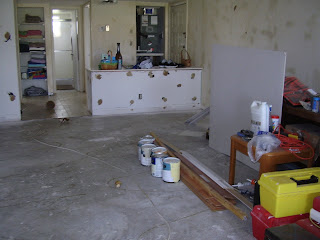 Not too pretty, eh? Also, at the time, we'd just gotten engaged and we were busy planning our November wedding. Yet despite being very busy at the time, I can recall feeling as though something was absent from my life. It was hard to put my finger on because I was in the happiest relationship of my life, we'd just bought a condo, we were getting married, yet my job frustrated me because I was teaching as an adjunct professor and I had to teach at 3 different colleges in order to piece together a decent salary, I was stressed about money all the time (especially since we'd just added a mortgage), and I just needed something to help me relieve stress and I needed something that was mine. Just mine and that helped me escape the remodeling, the wedding, the dissatisfaction with my work. That turned out to be running.

When I started in June (I had run on and off for years preceding June 2005, but had never been committed to it), I ran in cotton shorts and t-shirts. I didn't have appropriate shoes or socks. I had an mp3, but no Garmin or other gadgetry, and I could run 3 miles, but it was slow. Prior to that June 2005 start up of "21 Days" I had run 2 races: 1 5K, which I finished in about 35 minutes, and 1 2 miler, which I don't even recall the time, but I remember I ran it in Bemidji, MN on the morning of July 4th, 2003 and I had been up until 3 am, drinking, the night before. I think I was still drunk when I showed up to the start line that morning. It was painful.

Through that initial summer, and into the fall of 2005, I ran a few 5Ks, some of which did NOT go well, and focused on simply making running a part of my life. The most significant race during that time was the Tamarac Turkey Trot -- a Thanksgiving Day 5K that starts right out our front door. It was the day before our wedding, and that day we were having about 25 people to our condo for Thanksgiving dinner/Groom's dinner, and I needed that race. It was perfect: Weather was nice and the course was familiar -- and despite everything that was coming together at that time, it was just me and running. I think that race was the official beginning of my appreciation for what running could do for me.

The next day, we got married: 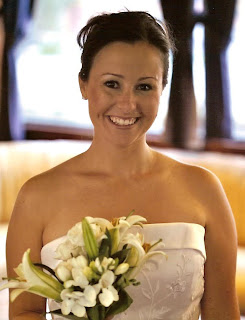 A few months after we got married, we got Scooter: 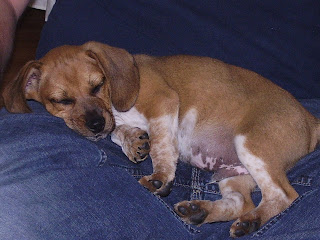 Adding a Fur Baby to the mix certainly made life even busier, but I kept at the running, primarily racing 5Ks, and then in the summer of 2006, I decided to take the plunge and train for a marathon. I chose Disney because its timing was good, it was relatively close, and I thought it would be fun. I spent nearly 6 months training for that -- at the time, the longest I had ever run was about 5 miles -- and while Disney wasn't the finish I imagined for myself, it was a finish, and crossing that finish line in Epcot is one of the best moments of my life. It was the reward of months of training, and when I crossed that line in January of 2007, I think I finally began to think of myself as a runner. 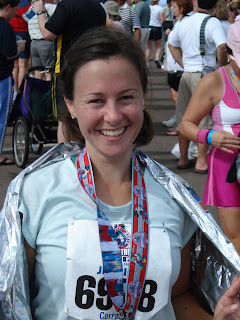 After Disney, I suffered from a long battle with ITBS, and this caused me a DNF at A1A in 2007. I ended up taking nearly 2 months off of running before training for Chicago. The training for Chicago was long and hot (as long as I live in FL, I don't know if I'd ever again choose to train for a fall marathon -- running your long runs in summer in FL is brutal) and the race was, of course, disappointing. But, it taught me a lot. Since then, I decided to step away from marathons and focus on variety with races, and in the past months, I've enjoyed some of the best running and races of my 3 years: I had a 5K PR in February 2008, I've had some of the fastest and most satisfying training runs, I've run a 4 miler and a 15K, and I've run 3 half marathons, including A1A (where I DNF'd in 2007) and achieved a PR there, and the Colfax Half, which was one of my best racing experiences ever: 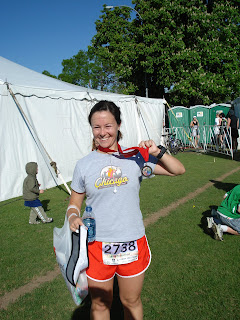 As 2008 continues along, I am still focused on race variation, and am planning some varying distance races for the fall (summer is just not a time for too many races in these parts), and I have nothing but high hopes for what running has in store for me. In terms of the running, I've come a long way from the initial post, and I'm light years ahead of those initial races.

In terms of life, the past 3 years have been fabulous. We finished our remodeling and our condo is fantastic -- it looks far better than I could have ever imagined it early on. Scooter is the best little Fur Baby a couple could ask for. And after working for 3 years as an adjunct professor, I finally got the full time, tenure track position that I'd worked so hard for, and after years of worrying about money, we finally managed to pay off all our debts except our mortgage (which, who doesn't have that one?) and I feel as though we're in the best financial shape we've ever been in. Finally, I have had a wonderful partner in all of this -- my Jer Bear. He has supported and encouraged every part of my running, as well as our life together, and even though the running is selfishly mine, I don't think any of it would have been possible without his love and support.

On a last note: When was scrolling through past posts (1,023 of them) and scrolling through all the pictures we have (way more than 1,023), it was startling to see how rich our lives have been in the past 3 years: all the big events, but also all the holidays, the vacations, the time with friends and family, the klutzy accidents and the poop-cidents, wow. It's been a great 3 years; I can only imagine what the next 3 years will hold! I hope you'll all keep reading to see.

Happy Blogoversary !!! I can honestly say that I look forward to reading your blog each day - I love that I never know what to expect when the page loads - a drinking story, a running report, talk about bowling, the dog, etc... The blog is fantastic and I hope you make it at least another 3 years !

Happy Blogoversary!! We began our running adventure in June of 2005. What a great trip it's been. :)

Happy 3 year blogoversary! I've really enjoyed reading your blog for the last couple of months. Great job on the running and on keeping everything in balance.

Congratulations. It is inspiring to see how you've transformed a 3-week experiment into a 3-year lifestyle change. Your final words demonstrate tremendous perspective that you've gained -- not just on running, but on life itself.

I wish you luck on your continued successes. And, yes... I'll keep reading.

Congrats! What a great post. It's great to see how far you've come. :)

Happy Blogoversary!! I can remember from when I started blogging, I think you were one of my first readers...

I look froward to many more posts to come!

HAPPY Blogoversary chica!! Wow, it's been an awesome 3 years! 3 years blogging makes you the Original Gangsta of blogging, now doesn't it? I don't *think* anyone has been here longer . . .oh wait you AND Wendy! ;D

Happy blog-o-versary!! You've had an exciting 3 yrs. Hope the next 3 are just as exciting (or more)!

You blog was one of the first ones I started reading when I began "seriously" running a couple years ago. What a journey you've had! I hope you achieve many more things and continue your streak of the happies (and hopefully don't have any more close poo calls).

What a great reflective post! I'll keep reading as long as you keep writing. Congratulations on blogging for 3 years...I didn't even think blogging was around that long!

delurking to say CONGRATS on the anniv.

made it there on my personal blog---with the MizFit who can say? :)

Did you have a sleepless night or had you been planning that post for days? It is cool to see how much things have changed in so little time. I know this sounds silly but I am so proud of your running and dedication to it. I get a little teary eyed reading about the highs and lows.

PS-You forgot to include a snapshot of the finished condo. Show that baby off! It looks fantastic.

Aw, what a great 3 year recap. You look beautiful on your wedding day.

Congratulations! That was a great post, thanks for sharing your story!

yours was one of the first blogs i started reading when i started running!

congrats on three years and here's to three more!

Happy Blogoversary, Jess!!! I am so glad you continued to write about life and running because I really enjoy reading your blog, and you are right - you HAVE come a long way and have so much ahead of you too. You are an inspiration to me, so keep up the great writing.

Jess, What a great trip through the past 3 years. I have seen the pics the condo has come a long way baby! You and Jerry are in a great part of your life. congrats I am sure it took a lot of dedication from both of you.Happy blogversary! I am so glad I found your blog. Now I require my daily wazzzuuupp with Jess fix. I look forward to meeting you in a few weeks. I know your gonna be cool if not fake it ;-0

Happy Blogoversary. You have had an amazing journey these past three years.

love this post! happy blogoversary!!! congrats on a great 3 years :)

Many congrats on keeping this up for three years.Looking forward to reading many, many more.

Very inspiring my dear. And it's really cool that you can look back, like a *real* diary and see what was going on a couple years ago. Keep it up.

This was great for me to read b/c I haven't known you for this long... it was nice to read about where you started and see that we're oh-so similar. Thanks for sharing and good luck in the years to come- hope they're as great as the last 3!

Happy blogiversary! Three years is awesome and you've accomplished so much! Congrats to you and keep up the awesome work!

Wonderful post, Jess. I'm so happy for you. I had no idea that much had happened in the last three years since I've only known you around a year. I enjoyed the update and always appreciate your wit and the good head you have on your shoulders. I wish I had had that at your age. :D

It's been a pleasure following along.

Congrats on the blogoversary! Thanks for the trip down memory lane.