Golf actually turned out to be a great time. I haven't been in years, so I wasn't sure how I'd do (and I didn't do great), but the morning was actually nothing short of a golf cart of fun. We started out by stopping by Starbucks on the way, so by the time I got settled into the cart, I had my skinny latte to sip while I contemplated which iron to use. 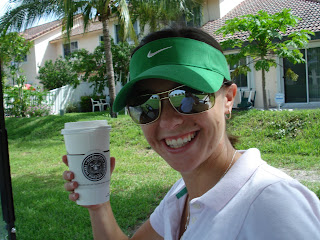 I started off pretty crappy -- 4 whiffs and 4 balls in the water -- but then I scored a par on a hole, so I guess I gots golfin' skillz; I just wasn't aware of them. Soon, Nike will be transferring their sponsorship from Tiger to Jess. And is it any mistake that my middle name is Ty? I don't think so, because I can be Tygress for the sponsorship dealio. 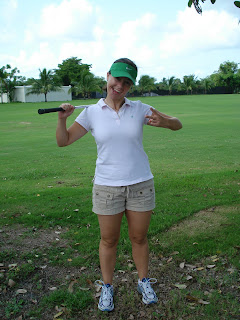 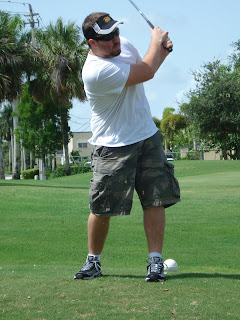 And here I am showing off my putting abilities. Next to riding around in the golf cart, I think putting is the best part of golf...kinda like mini-golf without any clowns or windmills blocking the hole. 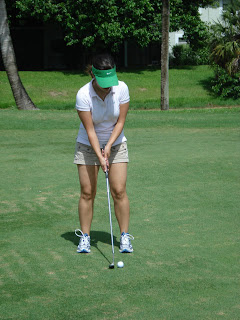 In the end, some of the numbers looked like so: 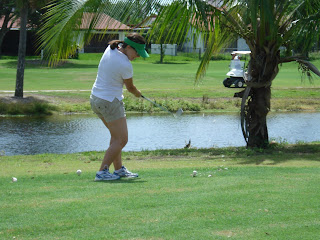 After 9 holes, I was spent and sweaty, and honestly, a little sandy as well (I had a particularly hard time getting out of one of the sand traps), but I am eager to return and Jerry is delighted by this since he's been trying to convince me to go for the past couple of weeks. So, who knows, perhaps Michelle Wu better scoot over; I could go pro.

After the hot and sweaty morning spent golfing, Jerry and I decided we needed a cooler activity for the afternoon, so we went to see the new Indiana Jones at the cheap ($3) theater, and this is my review: I'm glad I didn't pay $9 to see it. The best part about the movie was, I think, the air conditioned theater; otherwise, there were some good parts, but mostly it seemed like a waste of movie-making resources. "The Lost Ark" was so the best of that series, which means that Harrison Ford, Steven Spielberg, and George Lucas could've saved many years of their lives by allowing that film to stand alone.

After we got home from the movie, I went for a 4 miler. And I think I'm gonna have to de-auto-pause the Garmin. It kept timing out on me and "auto pausing" when I wasn't stopped or even going slow. So, with all the pausing, it recorded my 4 miler as 3.81 (I know exactly where 4 miles are -- I run this route all the time), so the splits are for hell on that run as well. I guess I'll go back to my trigger finger and trust that I can keep it more accurate than the Garmin can. Damn technology.

Golfing can really be fun. You look like you were enjoying it!

Great job with the golf. Did you set auto-pause to When Stopped as opposed to a specific pace?

I've got to where I enjoy golfing too. I just need to play a little more - well a LOT more.

sorry. couldn't get past the Starbucks. mmmmmm.....Staaaarrrrbbbuuuucccckssssss.

Well, you looked cute - love the visor. Still wouldn't want to gold or see Indiana Jones, but I'm glad you had a good time.

Glad you had a good weekend. Loved the pics of all the new stuff (and Scooter of course) and the stories about Jerry shopping. I say, let 'em shop if they're willing. :D I have one like that too. He has come home with literally 20 cans of veggies that will in no way, shape, or form fit into our already swelled pantry. Perhaps there's a shortage coming or something? Oh well. I didn't have to do it!

I suck at golfing - but every now and then when you connect on a line drive -it keeps you coming back! Cute pics, you look like you had alot of fun.

I have never been fo really reals golfing. Looks like fun!

You little golf pro! Love the green Nike hat, makes you look like you belong out there. Jerry better watch out or you will be kicking his butt before he can say boo!

How were the prices? Brian always wants to go golfing but we don't want to give up the rent money for it.

One question....is that really coffee in the Starbucks cup ? :)

I was going to say the same thing as Anthony. Was there beer in there?

I love the stats. My favorite was the number of tress accidently hit. Glad you enjoyed the golfing experience.

damn girl you know how to dress the part! that outfit is so golfy! love it!

Golfing is the most frustrating and awarding activity I know. Great job girly - and you look super cute on the course!!!

Do you think beating Jerry the first time out with him was wise? I know Ryan hates when I beat him at video games on my first try.

I don't think Golf is ever going to be the same :-)

P.S. You're supposed to drink BEER!! much like bowling :-D

Golf just looks so cool and classy to me. I gotta get on that bus. I am all about giving off the cool & classy feeling. The pics look great you look like a lil pro. PS who is all matchy matchy now?? The green in the golf shirt neck rim, the visor, the Starbucks cup...hehehe

The condo looks great! Like a Pottery Barn catalog, stylish yet cozy. Love it!

Looks like golf was a lot of fun! Love the pictures!

tygress...it works on SO many levels!

Now I'm coming down to FL to golf with you. We could have some seriously crazy fun.

I decided last year that this year I was going to become an expert golfer. I haver never golfed, but if I wasnt going to do a marathon this year I figured golf was an interesting alternative. Next thing you know Im having a baby and now all I do is sit on my patootie. Maybe I will take on the world of golf in 2009 :)

nice job out there on the course! Golf is a haaaarrrrrdd game!!

Oh my gosh, I would have been pitting out and sweating all over the damn place. They probably would have kicked me out for offending the other patrons with my sweat.

I did golf once in Arizona. I was drunk by the 3rd hole.

ROFLMAO!! OMG Do you have the other one too? Uhhhh I think it was called "Why Do Men Fall Asleep After Sex?" I forgot to take a pic of that one. Mr McG was looming over me after I got a pic of the last book and was like "WTF are doing?!" HAHAHAHAA

Love the pics.
Thanks for the tip on the Indiana Jones movie. I'll keep it in mind as a renter.

Sorry to hear about the garmin auto pause feature. Must have something to do with the satellites coverage in that area.

Ah, now I have one more reason not to try to FIND the autopause feature. LOL