Yesterday, I was gone for a few hours in the afternoon to attend a friend's baby shower.  When I returned, Norah asked: "Did you have a good run, Mommy?"

I'd been gone about 5 hours.

But this is what they think I do when I'm not around.  And, it's pretty much true.  Occasionally, I slip away for other purposes, but during the summer, since I'm not working, pretty much the only time I'm away from them is when I'm running, and like Forrest Gump: "I [am] always running!"

For kids, time is an intangible concept, despite the fact that they're always trying to strike a two minute bargain with me -- "Time for your nap, Caleb."  "Me play two more minutes, Mommy!" -- so for them, 5 hours of my absence didn't register as an unusually long time for me to be out running.

At this point, the kids' association with me and running has solidified.  We were discussing our tentative 4th of July plans for next week, and Norah interjected by asking me: "Are you gonna run your running race?"  (In the past, I've infrequently run a local 5K on the 4th.  But this year, I'm thinking of skipping it -- too much driving back and forth -- but...maybe.)

I think it's pretty cool that they think of me as a runner, since I do too, and like any Running Mom, I hope the influence one day rubs off on them so we can run together.  Until then, it's also pretty sweet to enjoy the time I spend running alone, and when I get back, I'm greeted with: "Mommy running?" from Caleb.

...has been pretty lax as of late.

I have excuses, but they're boring and basically boil down to: I've been busy and haven't felt like it.

But here's what you need to know:

Kids and I have hit our summer stride, and we're having a great time doing all kinds of parks (regular and water), museums, and swimming basically everyday.  I was just thinking the other day how nicely "mushy" my brain has become in the last few weeks as I haven't had to think about anything work-related in 6 weeks.  It's quite lovely to reach this sublime state, and even though summer SAHMing is its own kind of work, it's been nice to have a break in our school year routines.

We are tanned, pickled in chlorine, and loving it!

On the running front, I have continued to streak, and am on day #...something.  See, I told you I had a lovely mushy brain.  Guess I have to go check the stats...

Last week's mileage was weak, and I took not 1, but 2, minimal mile days, but it was a necessity.  This week, the running has started off strong, super hot (90s everyday here lately), but strong.  It's a sweat-fest, but that's summer for ya.

The Runs I've Had

It seems as though the runs, and their timing, have been a bit outta whack this week.

Monday:
After work, Jerry attended a mandatory meeting for Norah's school for the upcoming school year, and someone, somewhere along the line, got the time wrong, and it was at 6 pm instead of 5 pm.  So, instead, of him getting home at 4:30, as he usually does, it was 7 before he got home.  When he walked in, I was already in my running clothes; I basically high-fived him on my way out the door and his way in, so I could quick squeeze in 3 miles before Caleb's bedtime.

Tuesday:
Ahhh...all the time in the world for a nice 6 miler.  The run went well.  Except for the fact that a bee stung me on the palm of my hand at 4.5 miles.

It had landed on my shirt, and not looking -- I just felt something sticking to my shirt -- I swatted at it, and by doing so, cupped it in my palm.  Sting city.

I haven't been stung by a bee in probably 15 years, and I forgot: It fuckin' hurts!  I had to stop for a moment to pull the stinger out, and my palm throbbed for the rest of the run, but run, I did.

Admittedly, I felt kinda badass taking a stinger in the palm and continuing running.

BTW, 2 days later, I still have a red welt in my palm: That bee venom, it's a bitch.

Wednesday:
Again, ahhh...got some time, enough time that I figured I'd go ahead and run 7 miles.  But, as I was running, I was off in la-la land and didn't turn down the road I intended, so...the run ended up being 6.25.

I don't know about you, but once I find myself back home, and short on mileage, I don't usually have the willpower to putter around more.  I just call it "done."

Today (Thursday):
Lots of cleaning and errands and "to do"s on the list today, and the day and evening just got stretched out with chores and life's everyday things that need to get accomplished, so I again found myself with a day like Monday and only had the time for a 3 miler.

Tomorrow (Friday):
While I don't have a crystal ball, I do have a calendar, so I know our evening tomorrow has swim lessons at a weird time: 5 pm, which will put swimming during our typical dinner hour (yes, if you live in FL, it's basically mandatory to eat before 6 pm -- early bird special!).  But, after a brief discussion with the Jer-Bear, in which I explored the various run options that would help me circumvent either A.) Getting up early, or B.) Pushing two kids in a beast of a dbl stroller, he suggested I just run TO swim lessons (usually, I've been running HOME from lessons since they've been scheduled later in the evening in previous weeks).

Sounds like a plan: Run to lessons, watch everyone splash around, and then we can all go have Fun-Day-Friday dinner out.

For the big dude's b-day, we met some friends at the park for playing, a picnic, and cupcakes: 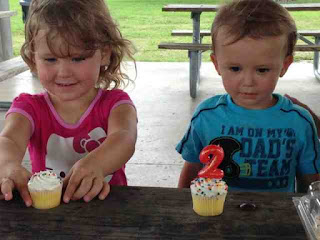 That afternoon, he opened gifts and we had a special dinner (mac and chz: his request), and more cupcakes.  On Saturday, then, was his big party at Chuck E. Cheese.  In short, he had a blast.

This morning, he had his 2 year old check up, and as always, he was healthy as a little bean sprout.  As for growth, he weighed in at 28 lbs, 2 oz (52%) and was 37* inches tall (97%).  It's funny how kids, even as babies, seem to have a growth trend that is just THEM.  Caleb has always had stats like this: Tall and slim.  I have no idea where he gets either, but it must be nice!

So far, being 2 has been pretty awesome for him. 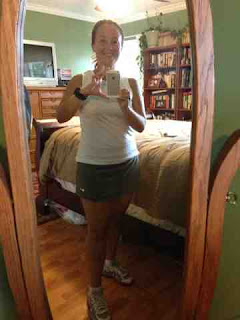 The running has been very slow lately, which has been kinda frustrating.  The slowness is maybe in part due to the rise in heat and, especially, humidity, or maybe too has something to do with not taking a day off in 5 months.  Or, it's just part of the running cycle (sometimes, I'm a bit faster; sometimes, I'm slower -- there's no explanation beyond that it seems).
Anyhoo, by now, I'm on day #153 and chugging forward!
*Jerry said the nurse definitely mis-measured, by his estimate of at least 1/2 an inch.  So, Caleb is probably really somewhere in the range of 36-36 1/2 inches, which would put him in a lower percentile, but whatever, I really don't keep track of that stuff very closely.  Let's just say he's somewhere around 3 feet tall.  Bigger than a Smurf, fo sho.
Posted by Jess at 12:16 PM 7 comments: