Running Knitter requested some visuals for the purchases I mentioned in yesterday's post, so here they are, some of my purchases for the household. First up, some doggie pillows. No wait. That's just my dog on the throw pillows I bought for the couch. He's made himself a cozy little nest there, hasn't he? 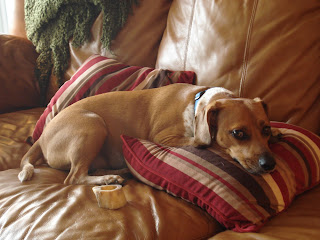 Also bought some picture frames for this "collage" that Jerry and I created in the dining room. But now that it's up, we've both decided that it needs about two more frames on the left. See, we didn't want it to be balanced or semetrical, but we also don't want it to be totally unbalanced and as it is it's a little "right heavy." Plus, I want to change the 3 pictures in the 3 picture frame to replace them with some that are more in keeping with the "tone" of the others. Problem? Those kinds of pictures have not yet been taken. Otherwise, I'm pleased with the project. 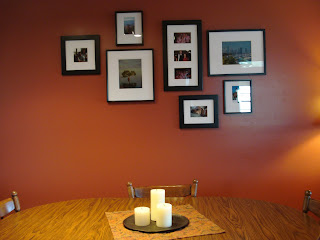 So, thirdly, I bought this centerpiece for the dining table. 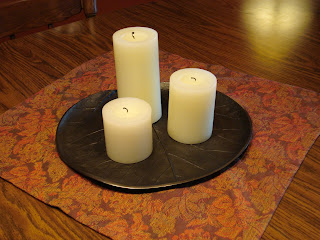 And last of all, new bedding. The angle of the light makes the picture look pretty dark, but it doesn't help that the new comforter is a chocolate brown too, so the effect here looks darker than it is in real life. Anyhoo...new comforter, new sheets. 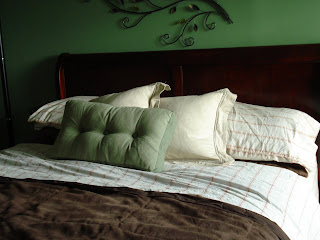 In other, non-home related news, I did get a 3 miler in before the crab/ribeye gluttony last night, and it went pretty well (28:31) and helped me feel better about the incredibly extravagant dinner (even though what I burned in my run was probably the equivilant of my serving of potatoes -- on the plus side, Jerry and I did split one ribeye instead of eating both; still, it was tons 'o food).

This morning, Jerry has informed me that I'm going golfing with him. I'm not real excited about that because I'm sure I will suck. Plus, it's hot out there. So I will suck in the swelter on this Sunday morning. I'll let you know how it goes.

Great looking home. Have fun trying to not suck golfing with Jerry

You weren't kidding - sure is a vast improvement against the "before" pics.

Looking good! I can't wait to come see it in person. Maybe this week Miller and I will take a few trips to visit people so I get used to carting him around by myself. I want to do some retail therapy but with the kid now, the only rooms that need redoing are major remodeling jobs (bathroom and kitchen). No small knick knack will do. I want complete overhauls (too much HGTV for me lately).

Golfing?!? Ohhh you poor thing :P I hope you will bring a cooler full of beer, might make things a little more enjoyable? LOL

your home is beautiful. we need to do some serious re-decorating to spice things up in our place. oh i used to love golf, it's not bad I hope you have fun and take pics!

Thanks for the pics! I'm a visual learner, you know. :) Love the pic of the doggie pillows.

Awesome stuff. The picture of Scooter on the couch is priceless !

I suck at golf. I tried playing when I was a teenager, but it is just too slow for me.

I love the new bedding!

House is looking pretty good...looks like Scooter approves, too.

How was golf, did you make it through the course?

Love all of your new stuff! I have so much trouble with balancing pictures like that.

Love picture collage thing. I agree you need something more on the left. I can imagine that it might be an unending battle.

and then before you know it, the whole wall is filled up! LOL

Scout always does that will my couch pillows . . . she makes a mean pillow fort!

All pillows we have in the house are "dog pillows". She even has the nerve to take the ones on our bed (decorative ones) and THROW THEM OFF after its been made. Guess she doesnt like those.

The place looks great - it's exciting to get new stuff once in a while. Makes everything feel new and fresh.