Miami Half: The Long Version

Pre-Race: The part that made me the most nervous in anticipation -- the getting to the race -- was actually quite simple. We got to the race easily, parked easily, and then had tons of time beforehand to stand around; however, I'm glad we got up early and got there early because it didn't take long to get crowded and I'm sure the traffic and the parking may have become more difficult if we'd arrived any later. 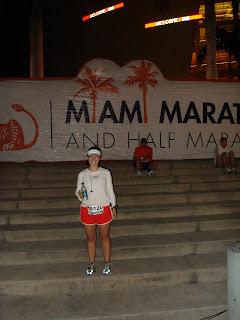 At a quarter to 6, we assembled in our corrals and at 6:15, the race got underway: 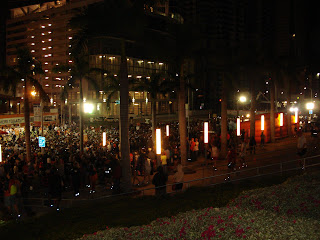 Miles 1-4: The first miles were erratic in terms of pacing. The first mile was crowded so there was no choice but to stick with the crowd's pace, but the first mile was also probably the most scenic -- we crossed Biscayne Bay and the cruise ships were all lit with their night's lights and the sight of them with the city in the background was really pretty.

Just past mile 3, I spotted Laurel running and I said a brief hello. She was running with her group, so I left her with them and continued on my way.

Miles 5-10: This is where I felt like I was finally able to find my pace and these were the miles that I felt the best. In miles 1-4, I had a hard time breaking away from the crowd, I stopped a few times at fluid stations, and I stopped to use the bathroom; but by mile 5, I felt like I was all set and I basically set the "cruise control" in these miles.

The highlight here was running up Ocean Ave in South Beach just as the sun was rising -- it was beautiful.

Miles 11-13.1: At mile 10, we started to cross back from Miami beach into Miami and the bridge back felt like a steep incline at this point, so I walked the incline and then ran the decline back into the city. Crowd support here was awesome, but I was starting to lose steam. The last few miles were slow but I knew I was almost there so I kept pluggin away.

At 12.5 miles, I saw my husband. I stopped briefly to give him a hug but then he told me to get going, so I headed out for the last .6 miles. Even though it was so close to the end, the mental boost I got from seeing him really helped in that end segment. The half marathoners broke away from the marathoners, and then we headed down the shute to the finish.

The crowd was loud and busy, and it felt great to come down that straight away feeling so good. I passed my husband and in laws and then stepped over the finish line!

I had estimated that I would finish somewhere around 2:20, so my time of 2:22 was pretty close to my estimation. I think I could do the distance in a faster time (most of my training runs were faster), but I think I'd need a smaller race with fewer participants in my way; hopefully, A1A in 3 weeks will be an opportunity to improve on what I did this morning. 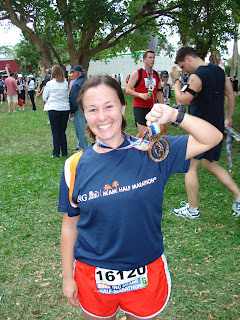 Post Race: I got my medal, got the chip removed, and got my refreshments and then met up with my family. We didn't stick around long (it was starting to sprinkle) before heading back home for a shower, a big breakfast and a long nap.

This afternoon, I feel great. My legs are a little tired, but aren't real fatigued and I can really appreciate the half marathon as a race -- it's long enough to feel challenging, but not as long and exhausting as the full marathon. It was a great race and I will probably do it again next year -- the scenery is nice, it is well-organized, and the course is pretty flat (with the exception of the bridges).

Congrats and a great race report, thanks Jess.

Great job ! Also on the Garmin - I've also found GPS error (plus and minus) in many of my races. Sometimes it is due to slight signal loss (such as when going under a bridge or through a tunnel - as happened at Disney), but most of the time just do to plain old error.

As far as the Garmin goes, I've had mine be off before (plus), as well. Nothing huge but hey, when coming down to the wire and you want to end it already, it stinks LOL

I, too, find Garmin is off slightly during races. It's mostly because you aren't running the course they measured. "Wait, yes I am!" you say.

The courses are measured in straight lines from turn to turn, generally (imagine wrapping a string around each turn). But most runners will be weaving around people, taking wide turns, etc. Also there is loss of signal and what not. At Chicago, my Garmin read 26.62 by the end.

Also, theres a guy in my home town that always runs bare foot. He's quick too, gives me a run for my money! Unless the course has gravel, that is!

Thanks for the pics and update on the race. Sounds like you had a great time. As always, I am in awe of you. Congrats!

Great job and summary. Barefeet kinda makes sense in some weird way if I were on safari running from a lion...ah, never mind. I wonder if that runner has joint pain? It is probably more ergonomically correct for a runner to run without shoes but with today's technology and running on asphalt...hook me up with some Nikes.

Congrats on the race!

WTH?? A guy ran with no running shoes. I cannot imagine doing it. Hey Jess, BIG CONGRATS!!! The race report was AWESOME!!! It did gave me a nice goose bumps. I have to be jealous for one thing. The weather you had was a hundred time better than mine up in NJ. I really envy all those Floridians enjoying the nice weather.
GREAT JOB!!!!

I agree with Wendy about the Garmin mileage. I am a zig zagger and over time this just adds up. I even read about it but never could remember where.

I felt the same about the crowds at PF Chang's. I really prefer a race with about 10,000 less.

Congratulations!
My old roommate was an ironman and he used to train a bit barefoot to strengthen his feet. But a half marathon seems a bit excessive!

Congratulations! I love the shirt and it sounds like a good choice for a race. It definitely makes things a bit more difficult with that many runners trying to find your pace at the beginning. Looks like you had a strong finish that last mile.

Chances are the route is correct. When they measure its one line following a specific path on the road. If you deviate from that AT ALL, say like in weaving or going from one side of the road to the other (to a water table) its going to add distance!

Congrats on a solid race, I think the Garmin thing has been pretty much covered. Nice solide set of splits and yes a smaller race would more than likely result in a faster time weaving and water stops will always slow you down.

Shoulder pads and a Fuel Belt?

Nice job Jess! You did great!

Congrats! Nice run and nice looking medal! The shirt looked good too. You ran this like it was all in a day's work - yawn!

Fantastic report, Jess! Congrats, did a super job :-)
i too had a faulty Garmin read at my pueny 5K race. It was short .8? I would rather be short than on the plus. You look great with your medal and all smiles!
Glad there was not too ,uch fatigue this afternoon.

In Hawaii there are always people running barefoot...one time there was a mom and daughter duo doing a 10K barefoot....they looked happy at the end.

Great job! I am planing on running a half this year!

THe bridge from Detroit to Canada sways during the marathon, too. It's a little disorienting.

Congrats on a great race (and to Jerry on his promotion!)

Love, love, the race report! Sounds like a good race, with the exception of the crowdedness. That's a good half time, and I'm stoked for you!

Rest up this week.

Yays for a great half marathon! (and I was just thinking along the lines of what Wendy said in regards to the mileage... did you veer a lot?)

Congrats...could you get any cuter?? Excellent job!!

Dude! Congratulations! Sounds like you had a really good race.

Most courses are off, usually they err on the side of longer than not. It would also depend on how you took corners, etc., perhaps you add a little distance over the long run by zig zagging around people, bathroom breaks, etc.

barefooting is the business. you should try it sometime.
no better way to learn correct form than to do it at least once a week.

Hey, congrats on a great race. Loved the report. How cool Brian Sell was there. A1A -- here you come!

The Indy Half is supposed to be body to body, too. It's the largest half in the US with 35,000 registered. My niece-in-law who ran it last year said it is a great race, but you have people with you pretty much the whole race. I guess as long as I know that, it might help with what to expect when I run it on May 3rd.

congrats on a great race jess!!!!

my coworkers flew down this weekend and ran in the race too! wonder if you guys "ran" into each other!

Congrats on a great race!!

Congrats on the race! I can't believe someone was running with no shoes, that's just insane.

Cute pic!
I think I would have freaked out about the moving bridge~!

I think i wil be about the same time as you this year. Good job. Did you see Laurel?

Ahh, great report and nice race! I don't like that bridge swaying business. The Mall of America actually does that on the top floor and it starts to make me a little sick. I've always heard that the race courses are very very specifically marked and indeed, are the straight line concept others are talking about. My Garmie usually reads long also and it bothered me quite a bit but it sounds like it's pretty common.

Jess, it was great to see you on Sunday. Maybe next time we will be able chat for longer than 10 seconds ;)

I agree with the crowds during the race. I was so annoyed by the open lane on the bridge, but I don't know if there is any way they can completely block off that side.

And I too felt the bridge move. It's really strange right? Like you're sort of on a big trampoline for a second.

Great race report. Maybe I will see you some time at the A1A.

I am totally curious if I was the person that you saw barefoot running. I ran in just a blue pair of shorts. That is what I do, run barefoot! and NO it doesn't hurt! haha, Youtube: Barefoot Joe.....See if thats me..

I'm glad you had a good time at the Miami half. Unlike you, I really enjoyed the crowd and didn't find it was too much of a slow down but I wasn'T racing it per se (just crusing along!). We must have finished right around the same time (mine was 2:21:44) but I can't say if I saw you. It was pretty crowded at the end!

Good luck on your next half!