I figured it's been a while since I've dedicated a whole post to talking about the kids.  So, to indulge that urge:

Caleb
It's my theory that kids reach a peak level of cuteness at 2, which seems contradictory to 2's typical bad-rap, but I think 2 year olds are pretty much the cutest.  They're still kinda babies, but with increasing verbal abilities, more physical dexterity and agility, and a kid's expanding understanding of the world.  This all equals total cuteness.

Caleb, therefore, is at Code Red Cute right now.  Don't get me wrong, he is also a goblin, but at least he's an adorable goblin -- which is maybe even worse. 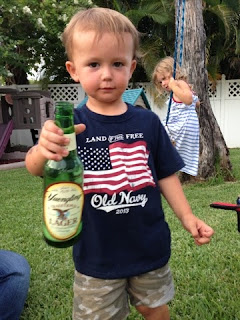 He can now scale almost all playground equipment and manages most obstacles with prowess as he follows in Norah's shadow.  He talks a lot, doesn't listen to us, is stubborn as a mule, is swimming like a fish (he recently started jumping in and swimming to me on his own; it's pretty impressive, really), and can harass his sister and Scooter like a pro.  He also recently moved up to a big boy bed because he was leaping out of his crib, so that now means we get regular 2 am visits, and he decided that, as a 2 year old, it's now his job to get picky about food and making bedtime a chore.

He's also prone to biting and hitting.  I don't know if it's a boy thing, or just his personality, but you have to watch out for those teeth and his propensity to smack you with a toy (he has two toy swords, both of which are forever "put away").

Still, do you see that little dude handing me my 4th of July beer?  THAT is why I had kids -- so cuties could hand me coldies.

Norah
Jerry and I were just recently talking about the difference a year makes (for both kids: this time last year, Caleb was taking his initial steps; now he can climb rock walls), and with Norah, there's been a lot of maturation.  She's getting to be such a big girl now, a sweet big sister who is, more often than not, very patient, kind, and understanding with Caleb (even though he returns her kindness by biting her).  She listens to us so much better now and we can reason with her so much better now.  She understands complicated concepts, like delayed gratification, and is eager to pull her share around the house (she actually loves being assigned "chores").

Granted, she's still an almost-4-year old, so we still have tantrums and fits of rage (especially directed at her frustration with Caleb; today, I overheard her tell him, "You're really giving me a headache!"), and no kid is perfect.  3 was kinda a rocky age for her (as it seems to universally be; 2 gets the bad rap, but so far, in my experience, 2 was sorta-tough, but 3 was a shitticane of tough), but she seems to be coming into her own now as a full-blown kid, and it's fun to be a part of. 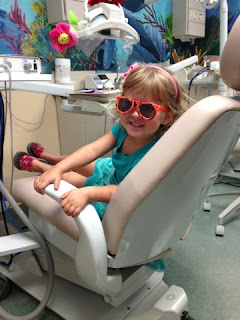 Also, this summer has been nice since being at home, I took away her afternoon nap, and bedtime stopped feeling like waterboarding for me.  My opinion of her rose considerably when I didn't have to spend an hour with her every night bargaining and pleading with her to go to bed.
Now, I get to do that with Caleb.
She's eager to go to VPK (voluntary pre-kindergarten) this fall, and I already feel the familiar heart-twinges at seeing her slowly growing up.  (In general, thinking of going back to school on Aug 19 gives me the heart flutters; we've been enjoying such a carefree summer.)
Over the weekend, we all went to see "Despicable Me 2" in the theater (Caleb's first successful theater experience!), and Gru has this freeze gun ("Freeze ray!"), which I keep thinking about: I'd like to freeze these kids at this age forever right now.
Of course, if I even tried, they'd both lipstick-taser me.  I know it.
Posted by Jess at 12:14 PM

Good looking kids you got. Cheers!

Very cute. When my kids were a similar age, we sicked my son on his sister when he woke up in the middle of the night and wandered in to wake us up, redirecting him to her room if he didn't want to be alone. At some point I didn't care where they were sleeping as long as it wasn't with us. I think their night sleep was compromised, but ours wasn't, and they both ended up easier to put to bed. I think at that age, you just do whatever works!

Your kids are growing up fast! =D

It's easy to get caught up in simply reading your blog, but it's always very apparent to me that you are a talented writer. I thought that should be recognized :)

All the kids are growing up too fast! Rylee keeps saying how grown up Norah and Caleb look on Facebook. She was impressed by their swimming skills in the video. And she wants to come over and visit Scooter when we get back! :)