On Teething, A DNS, and Pushing a Dbl Jogger

Caleb has been a handful as of late.  Poor dude is teething something fierce, but instead of teeth coming in, it is just pure evil.  It's been about 10 days of various "symptoms" culminating over the weekend in an effort to make Mom and Dad's lives a living hell.  His general weekend philosophy seemingly was: "If I can't sleep, neither will you!"

The only things to make him happy were treats like cold, cold ice cream: 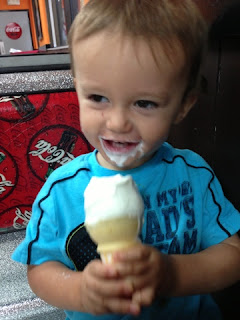 Otherwise, he was a bear.  So, poor sleep and dealing with the crabbiest almost-2-year-old on the planet meant I was spent.  Sunday's 10K?  I was out.

Friday night, I realized my online registration for the race hadn't gone through, and Saturday morning (after a night of not-so-great sleep), I decided to take the registration snafu as a sign, and I texted my friend Wendy, who I was supposed to meet up with, and told her the truth: I'm not showing.  She was understanding.

It wasn't that I didn't want to run (I still ran all weekend -- Viva La Streak!), but the thought of getting up early and driving to Boca to race?  It was just too much.

So, on Sunday, I decided to take on a challenge of a different sort.

I broke out the double stroller, which has been sitting idle for a LONG time, and I ran the kids to the park, let them play for awhile, and then ran them home. 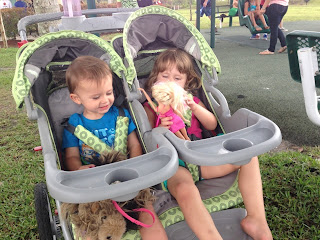 I've been following you since before I got pregnant (thanks to Run Like a Mother) but I've never commented. I've recently been trying to get back into running and have been feeling horribly out of shape and SLOW. Not only am I dragging along my spazzy 3yr old Weimaraner but now i'm pushing the BOB with my 11mo old my daughter too! Your post today made me feel better about being slow and reminded me that running (ok really slow jogging in my case) with a stroller really is hard and to give myself a break. Thanks for the motivation too - planning a stroller run for tomorrow!!!

I am impressed by all runners but tossing in a stroller (much less a double stroller) warrants sainthood points.

BTW, wasn't it super windy that day? That wind will kill you. I am surprised you could even push the giant wind catcher. LOL!

Now that it is warming up a bit I've broken out my big rig! Holy Hell that thing is a beast!!! With one in the carseat still and the other giant 4 year-old I was lucky to break 11 min/miles! I used to love with my single to the park and beach but the double is a entirely different dance! WOW!! I'm determined though to conquer the double!! Kudos to you for the stroller run! The wind tends to make it like a sailboat!

Yowza! Those kids need to lose some weight, and that ice cream can't be helping. Cheers!

I don't see how you can do the double duty like that. seriously impressive.

i totally understand this! it's a lot easier on the way out - and then after you've played in the park for a while (which, in my opinion, is a workout in and of itself) you have to run back! total fresh hell :)

who cares about your pace though- you're pushing a double stroller on your SECOND run of the day. youre a rockstar!

I went for a run yesterday pushing the double BOB for the first time. I got really used to the single, no problem, but the double is no joke! I didn't even bother looking at my pace.

I just have to say your writing cracks me up! This is my favorite part of this post -

so great. and so dam true!