Today was a busy day: up early to sub for a fellow instructor who has bronchitis (I have to sub for her again tomorrow too), then regular classes, then my husband and I took Scooter to the vet. He had some kind of allergic reaction to something he touched (hard to tell what, but could have been as simple as walking on someone's lawn where they had just sprayed a pesticide or herbicide) and he had to get a shot and some prescription pills. That Scooter dog, good thing he's cute, because it's always something with him. 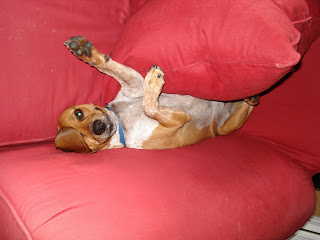 But despite being busy, I still got in 30 minutes of yoga, and looky what I can do! 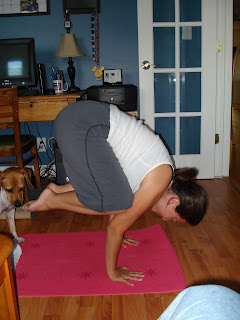 Don't get too excited about my achievement because a split second later, I was toppled over like so: 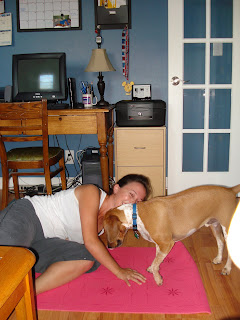 Yes, Scooter is my spotter. He's not much for reassurance and he assumes that my presence on the floor means that he has a great opportunity to lick me on the face.

After yoga, I went for a 3 mile run and while the yoga went great today, the run was...meh. I mean, I finished it, but geez, I felt like I was moving at the speed of sloooooow. Ah well, maybe all that crow tuckered me out beforehand.

I wonder if the Jer-Bear likes your yoga?

Mendy said...
This comment has been removed by the author.
19:33

That's too cool you were able to just get in that pose. Looks tough! Sounds like you might be liking some yoga.

Poor Scooter. But, he doesn't look like he's suffering from anything at all. What a cutie.
:-)

BTW, Got the hat for Grace at Old Navy. She loves that thing, and even wore it earlier in the day with a Navy Blue dress. It so didn't match, but Oh well.

Damn! That's pretty impressive! And it looks like Scooter agrees!

Nice job on the crow!!

i like scooter a lot. i've never done yoga but that crow looks hard. maybe i'll try it tomorrow or something. scooter...what a guy.

I would bow or something but it hurts too much.

I tried your crow thing, but I could only hold it for a second or two. And, the only reason I could manage that much is probably because of my dumbass broad shoulders.

a slow run, hmmm, sounds like a good idea. we'll see if I can make it happen tomorrow.

scooter, what a guy - always licking - he could probably help Marcy with that wallpaper stripping.

She is tan but I think that was the blood rushing to her arms and head!

Way to go on the crow! I can't even stand on my head-I certainly couldn't push myself up and hold it!

In the second picture, I can tell exactly what Scooter is thinking:

"I wonder... if I licked her feet right now, would she fall over and play with me?!"

In the third picture:

damn! i wonder if i can crow too?!

I am so envious. I wanna do crow!

I was very impressed!
On the Scooter matter...hope all is well soon. Is he itching?
How are things going with the Condo board?

Now that's a great yoga pose. We all need spotters like that, too!

My black princess loves to sleep under the couch pillows. Make sure you don't open your mouth in that position. Scooter may come by and give you a kiss! LOL..

Ohhhhhhhhhhh my God. Gimme your notes on that pose LOL

I'm impressed!! I think Scooter wants to partake in some yoga. He's such a cutie!

the position in picture#3 is something I could do. Picture#2...not so much...

Now I'm going to have to go home and try that pose tonight. I would do it at work, but I doubt they would be too impressed :P

Wow, you are da bomb!

Very cool and so cute! I can never do any ab work with the pug in the room... to many sniffs and licks in the face! Hope he gets better soon!

At least Scooter was sniffing your feet in that first picture and not doing what dogs normally do. That would make that pose difficult to hold I would imagine. :-)

Nice pose. Medal on the wall not too shabby either!

Oh my GAWD, your dog is so cute!

And look at you and your freaking yoga poses!DAYUM!