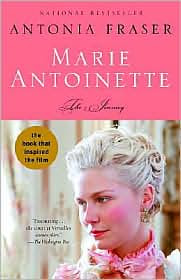 Originally, I wanted to be Marie Antoinette for Halloween this year -- I read the biography by Antonia Fraser and saw the movie adapted from the biography by Sophia Coppola (if you haven't seen this, it is a must -- very stylized, beautiful film starring Kristen Dunst as a striking queen), and for the better half of the spring of this year, I was quite enraptured by the history of this unfortunate queen (I am also obsessed with Anne Boleyn, but I figure as a costume, she's a bit too obscure). So, I wanted either a pink or blue dress that was styled in the times, the wig, etc, but all that I could find were sexy versions, like this one pictured, or dresses that were $300 (+ wig +shoes +stockings, etc). Thus, I gave up on the Antoinette dream for this year's

Then, I decided I wanted to be Scarlett O'Hara, from Gone With the Wind -- one of my all time favorite novels and movies -- and she has lots of famous outfits, but could I find exactly what I was looking for? Of course not.

I'll give you a major hint -- October is certainly the month we celebrate Halloween, but October is a month famous for other celebrations as well, and this gal would fit in perfectly for such an ale-tastic time.

There you go, that should give it away. In the meantime, imagine my dismay when I came across this site today: It has exactly what I had been looking for and while it is pricey, it's not nearly as expensive as others that I had seen a few months ago. *Sigh* Maybe for next year.
Posted by Jess at 9:14 AM

I was going to say St Pauly's Girl

WS took my answer, have fun. We are going as a Wizard of Oz theme but off center a bit as the girls want to be witches, so I am stuck being a flying monkey, should be interesting.

You should be the High Life chick swinging in the moon in the old Miller ads.

I always found her more appealing than the St. Pauli girl. Of course these days since St. Pauli girl makes an excellent non-alcoholic brew, I have switched mistresses.

I like the Marie Antoinette idea, too bad it didn't work out for you. I've been meaning to watch the movie and read the book. Maybe I will rent it this weekend and make David watch it with me.. :-)

I love Scarlett O'Hara and Gone with the Wind! That would have been nice too! Looking forward to seeing the pictures!

Marie Antoinette would be a tough costume to be drunk in.

i worked for a brewery and had to dress up in that very costume for an event every october. can't wait to see how yours turned out!

See now I was going to say Juliette Low because we celebrate her birthday this month. :>P

Come to Charleston. The Race for the Cure starts in 8 hours. You can make it.

TOo bad the other costumes aren't returnable...guess you can add those to your "dress up night" collection.

Can't wait to see the pics! Have a great party.

Alas, my dream of being Wonder Woman did not come to fruition this year either. Maybe next year...