My running week begins on Sunday and ends on Saturday.  No reason for that except that the running log I use to track mileage begins and ends this way, so I've always correlated my week to fit the log.  Anyhoo, my mileage for the week totaled 15.  I know, for many that's a single day's run, not 6 days' worth of running (I took Wed as a rest day), but considering that the previous TWO weeks' worth of mileage came to 13 miles, this week has felt like the first true return to some running regularity.
It was mostly 2 milers for the week, but I had a few 3 milers as well.  And for the most part, my runs were solo, but I did take Norah in the BOB for 2 runs.  Including one, very humid run this morning, where she repeatedly asked to go home.  I told her I was taking her home -- we were just taking the long way there.
Aside from running, Caleb has really turned into a Smiley McSmilerson this week: 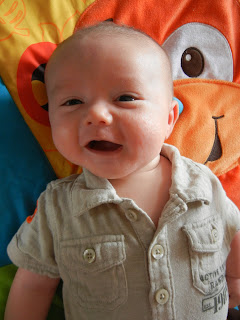 Last night, as I was changing his diaper at 2 AM, he was just smiling away at me, as if to say, "Thanks Mom!  I really like having my diaper changed!"  I think the smiles are one of the most rewarding milestones with a baby -- it's so much fun to feel as though there are two sides to the interaction!

As for the other nugget, Norah has been making regular, middle-of-the-night bedside calls to our bedroom this week.  She just can't seem to stay in her bed.  If she loved her own bed half as much as she loves ours, I think she'd live in there.  But, alas, she seems to prefer our bed, and not just for sleeping: 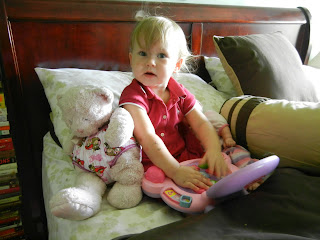 And, yes, Bo-Bo is wearing underwear.  Norah is obsessed with the underwear we bought her.  She has only been allowed to wear them a few times because they are rewards for consistent potty use, but Bo-Bo has been real good with the potty, so I said it was okay for Bo-Bo to wear a pair :)
Posted by Jess at 1:05 PM

i love both kid pictures you posted.

The kids look SO CUTE! I love baby smiles! :)

Bo Bo is such a good role model.

And love Caleb's smiles in that cute shirt!

Super cute kid pics, and great job on the return to running!

These are hard to find ... but a real life saver when you have a kid that doesnt stay in bed.
http://www.amazon.com/Stoplight-Sleep-Enhancing-Clock-Pajamas/dp/B002TKLN3M

Red means stay in bed, Green means you can get up ;)

Fifteen per week is awesome!! I'm struggling with that amount with only one baby, and in temps I assume I slightly better than Florida ( though NY is pretty sickening right now..).

I love the smiling too! So cute and it does feel like a "conversation" or something ;)

Whenever I want to complain about my heat and humidity I think about you!! SUCH CUTE PICTURES!!!! They are so adorable!!!!!
Awesome job on the running!!!

I am so jealous there has been some consistent potty use going on over there for you! I wish Eli was that intrested, he hasn't gone yet, but he loves the bathroom. I just can't wait to get going on that front!
See each kid is their own, Eli loves his bed but he hasn't made any real steps in the potty training world.
I love how Norah has a laptop, so cute!

Ha ha to the undie-wearing toy!!

Caleb's smile is so CUTE!

Aww your kids are adorable!