I think I could get into riding bikes if I had a swet ride like this one: 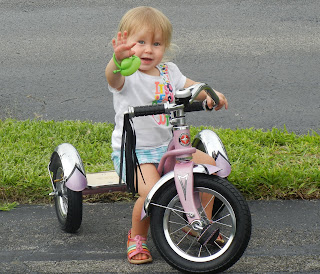 So, one of Norah's grandparents jumped the gun on her b-day and sent the above trike a few weeks early -- there is no more eager gift giver than a grandparent!  It arrived today and Jerry assembled it, and Norah thought it was pretty dang rad.  She hasn't yet grasped how to pedal, but she likes ringing the bell!

Oh, and on her wrist is the remains of a balloon turtle, most of which she had popped on her way home after dinner.  It's not a green growth.

With all the post-dinner trike excitement, bedtime got pushed back a bit, and it was 8:15 before I found a window of opportunity to go run.  I thought about just doing the standard 2 miler in order to be back sooner, but then I figured, "It's already nearly dark, may as well just do the 3 miles and finish up in the dark."  So, that's what I did.  It's not that running at that time is such a bad deal, it's just that by the time I run and shower, it's pretty much time for me to be thinking about bed, so I feel as though I don't have any evening.

Maybe one of these mornings I'll have to suck it up and aim for an o'dark thirty run and get it done before the sun rises.  It's just that since I haven't had a full night's sleep in 2 months, mornings are not my bright and shiny motivated time of day.  Still, it might be worth it.  We'll see if I can work myself up to that sometime.
Posted by Jess at 8:29 PM

I can put some sweet flames on that bad boy!

That's the pink version of Miller's I think (also from G & G). They sure know how to pick a cool ride. That's sweet! I don't recall my tricycle being so trendy.

Pedalling will come in due time. She looks pretty darn cute on it. I can't believe she will be 2 in a couple weeks!

sweet wheels!! happy early b-day to norah! have you thought about how you'll celebrate?

i have the same problem with running - either in the late evening (where i def don't feel like i have an evening!) or early morning (which isn't gonna happen).

I can't run outside after dark and I'm so not a morning person. Thankfully, Beer Geek gets home at 4:15 most days and (except during ridic heat waves) I can knock out a quick 4 before dinner.

now she needs a bike computer with cadence (of course)!

Cute! Hope you figure out the run schedule soon. Nighttime might not be bad for now while the weather is good, but be safe!

You could also say that an evening run is a great way to spend an evening!

Cool trike. She's going to love it. My youngest is 4 and still jumps on the trike whenever she gets the chance. Bigun is 6 now and ready to go without training wheels. it's nuts.

Thats an awesome trike! Brooke is still having some trouble pedaling her bike. Its funny, we kind of thought she would just know how to do it ... I guess you dont realize how many things in life you actually have to "learn" until you have your own kids and watch them go through all the life stages ;)

Nice job on the 3-miler! I hear you on losing the evening - if I run later in the day, I feel like I don't have any down time... and I don't even have kids!

Sweet ride indeed. Rylee needs to apply for 'trick my trike' if she's gonna be a cool rider like Norah and Miller. :)