Saturday morning, Norah and I were up before the sunrise -- which isn't that early considering the sun is currently rising at about 7:20 am here in South Florida -- and it was certainly scenic to watch the sun rise over the Atlantic. 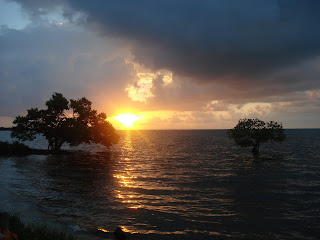 Other campers in our party soon followed suit, and we all began the leisurely task of making camp coffee and breakfast. A friend actually brought espresso and a camp-modified espresso maker, so I got to have a latte while sitting ocean-side; and, Jerry made an awesome "big breakfast." So, it was about 9 am before I got dressed in my running clothes and readied myself for my day's run.

By this time, the sun had been up for an hour and half, and it was easily in the high 80s, and I was already sweating as I changed into my shorts and sports bra. Everyone else in the crew was in their swimsuits and heading out into the water while I was heading out to run.
There were a few "Jess is crazy" comments.
We were camping in a state park, so I decided to run some nature trails on the other half of the park -- away from the camp sites. Part of the trails were a boardwalk that took me over and through some swampy marshland, but then I came upon the actual dirt trails, and those took me out along the ocean. Granted, it wasn't beach running (the Keys actually don't have notable beaches -- common misconception; they have narrow strips of beach, but it's not like the wide, sugar sand beaches that can be found along FL's mainland beaches), but it was close enough. I wish I had brought my camera along, but alas, I had left it back at our campsite, so sorry: No pics of this run.
While the scenery was enjoyable, the temp and the sun were not. I was pouring sweat and was really uncomfortable running under the sun's direct rays, so I only ran 2.5 miles and then returned to our campsite.
There were showers and bathrooms at our site, but I opted instead to hop into my swimsuit and take Norah out into the water for a dip instead. Thankfully, the morning's water was cool and refreshing (by late afternoon, it was the temp of bath water), so it felt good to get into the ocean to cool off post-run.
Posted by Jess at 5:00 PM

have you always been able to run so soon after eating?

9am seems late to start a run...even here...gets too warm by then. Good job getting it done!

I'm thoroughly impressed that you did your workout while camping. Nice! It sounds absolutely beautiful and I'm so jealous you could go for a run at 9!

so sorry the temps are still so high! but you still got out there! and looks like the streak is still alive--yay!

Love that picture! Nicej ob on the run!

Great job keeping the streak alive. Bet that water felt really good at the end. I'd have probably gone straight in in my running clothes...

I'm impressed you ran while out camping. *high five*

go YOU on doing the run.
Im so so ready for a break in this TX summer heat too.

Can't beat the sunrise over the ocean! Sounds like a great run, even with the pounding sun. Love some new scenery!

great way to cap off a run!

Nice job getting in a run while camping. I would have opted for the post-run swim too. :)