I don't always run with music. In fact, I mostly run without it since I run most of my runs with Norah, and I don't listen to music when running with her -- I like to be able to hear her. However, when I run solo, it's a treat for me to listen to my iPod and, I know that some people dismiss this, but I think I run better with music.

A few weeks ago, my iPod Shuffle took a digger. It was 2 and 1/2 years old -- in iPod years, that's like 99 -- and after getting thoroughly soaked on a rainy run, it could never fully be resurrected, and I had to accept its passing. Since the old Shuffle's demise, I've been running sans music, and I've missed it, so this weekend, I bought myself a new Shuffle! 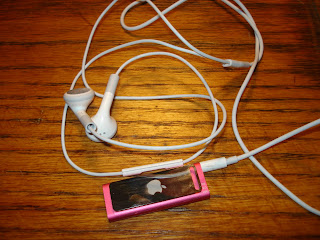 After running with it over the weekend, I have some thoughts about its new design and configuration. 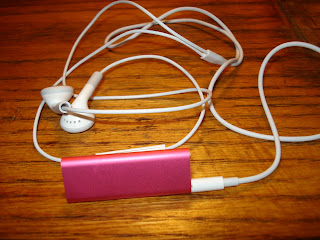 As you can see from the above pics, there's no place for the buttons on the device itself. So, where are they? On the earbud cord! Kinda awkward, in my opinion. This also makes the earbuds indispensible to the device, which kinda sucks because on my last Shuffle, the earbuds went before the device itself, so in the case of this new model, if the earbuds go, you have to buy a new pair of Apple buds -- not just any cheap replacement pair.

I chose to not confirgure the Voice Over program, which has an electronic voice announce each song and artist -- I don't need that while I'm running. I know what music is on there, no need for the device to tell me.

Lastly, I don't love the fact that the device automatically orders the music in ABC order, according to artist. Sure, you can set it to "Shuffle" mode, but I never liked that on the previous model because I sometimes had songs repeat while on longs runs; instead, I prefer to be able to manually arrange the songs in a playlist in iTunes, but from my limited use so far, the device doesn't seem to allow this sort of configuration. Which means that for my 7 miler on Saturday, I ended up listening to about 30 minutes of Foo Fighters. Don't get me wrong, I love the Foo Fighters, but I don't want to listen to all of their songs in a row. Perhaps I may need to re-visit the "Shuffle" mode and hope that it doesn't repeat.

On the whole, I'm pleased to again have music at my disposal when I run by myself, and again, I think it helps me run better, or at least it helps me believe that I run better!
Posted by Jess at 5:43 PM

There's a new Shuffle shipping in 2 weeks with buttons. If it's not too late maybe you can exchange it if you prefer them. It's a tiny square that has the circular scroll pad on it and a clip on the back.

There is a new shuffle coming out for $49 and a new nano that will be as small as the shuffle for $149 (or maybe less). I have my nano for so long and I am worried it will bite the big one soon, so this review was real helpful to me. I need to know what I will be buying...I just hopefully will be buying it later rather than sooner!

I have the same model that you just bought, and it does support playlists, but you might have to enable the voiceover option to make it work. Basically you hold down the center 'button' on the earbuds control center for a few seconds, after it reads the name of the song currently playing, it will start to read through your playlists. when it gets to the one you want to hear, just click again and it will play it for you.

thanks for your review!
i've had this new version and preferred the older one (like yours that died), too. i really dislike the buttons on the earbuds. i had problems with the volume randomly going sky-high, then barely audible...thanks also, other commenters, for the tip on the new one coming out!

I've heard not so good things about the new shuffle. I have an old shuffle and I really do like it except for the fact that it repeats some songs. That really stinks about your head phones though!

I love my Apple products, all of them, but sometimes I do wonder about the "upgrades." I don't know for sure, but I'd guess that the vast majority of shuffle users are active (runners, walkers, etc), so you'd think they'd design these devices with us in mind...

I don't think I would like the no buttons thing. I hate the Apple earbuds; they always fall out of my ears.

Ugh! I am grossly ignorant of all things MP3. Army son tried to show me how to work his but it just frustrated me! (I used it sometimes on the treadmill when I didn't have a movie)

AND I would sweat that little thing corroded in the first two miles! Is there a water/sweat/Shelly proof verion?

I share your thoughts on the new Shuffle. I got one last year and unfortunately put it through the washing machine. :( I have yet to replace it. I hate that the buttons are on the cord but I really just want a simple iPod and I do like the small size, except that I misplace it constantly as well!

I've heard a lot of complaints that people aren't digging the new shuffle because of the head phones. With all my iPods, my headphones have died early and I've just bought cheap-o replacements. It stinks that you can't with this version.

Although according to everyone else, the new one will better.

I just ran on Monday with music because I was w/out Eli in the stroller and enjoyed it, haven't done it in ages but was thinking of getting a shuffle now!

i'm glad my old style shuffle (little square one) still works. I usually find that the redesigns aren't necessarily better. Plus I'm a creature of habit!

i have read online reviews and opinions that the earbuds are gonna go out several times, and you HAVE to replace them with the apple ones of course...because of the controls being on the cord.

this is why i bought the older model one that everyone liked off of ebay.

Thanks for the review. I was thinking of buying one for its small size and clipability but I think I will hold on to my Nano until it dies (knock wood)!

i love music in general and would always be listening to it if i could. and i agree it helps me run better.

my ipod and I have been having issues...it's corroded from all my sweat after like 3 years and doesn't alawys want to play music is both ears...but I've been forcing it to work cause i don't want to buy another one :)

I bought my hubs a shuffle last Christmas. He wasn't thrilled that it wouldn't play songs in order so I figured it out for him:

1) Sort your playlist in iTunes (click the leftmost "123" column to sort, THEN drag/drop your songs into the order you want).

4) Press and hold the headphone control clicker until the voiceover says the playlist name you want.

5) Immediately let go of the clicker and click once to select that playlist.

That should play your songs in the order YOU want. Good luck!