Pre-Race
I got up at 5:15 and got myself ready, then I got Norah up and got her ready, and she, Jerry and I left the house around 6 am. Key Biscayne is a small island in Miami's Biscayne Bay, so it's about an hour's drive from our house. We got there a little after 7, and while Jerry tended to Norah, I went and got my race bib and timing chip, and went about the few pre-race standards, like lining up for the bathroom.

But, because Norah was along, there was one other pre-race necessity: Feed her. So, back in the car, I nursed her, and our timing was perfect: She ate and gave me about 10 minutes to spare before the race start. Here she is pre-race (bundled up because it was a "chilly" 60 degrees out -- one lady congratulated us on bringing the baby out and "braving the cold"): 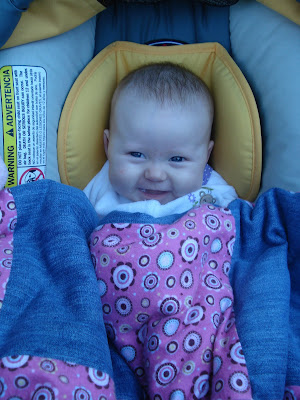 And here she and I are together pre-race; she's still in her jammies: 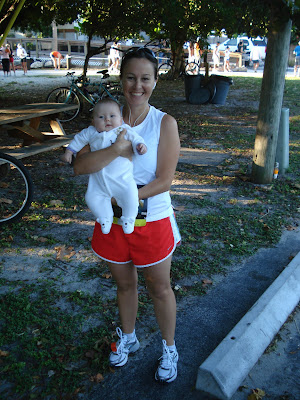 Race
The 5K and 10K started simultaneously at 7:45, which means that for the first mile, there was the usual congestive nonsense that seems to go hand-in-hand with a 5K: Children, walkers, and those unfamiliar with race ettiquette. But, a little past the conclusion of the first mile, the 10K course and 5K course split off from one another, and the crowd thinned out considerably.

Key Biscayne is mostly a state park, but it also consists of Key Biscayne Village, which is the residential half of the island and that consists of large, multi-million dollar mansions. So, the course wound out of the park and through these neighborhoods, so I was busy oggling the beautiful homes and their picturesque landscaping.

While it had been cool at the race's start, it quickly warmed to a comfortable 70 degrees, and it was sunny, clear, and there was a light breeze. Perfect running weather. So, I just ran at what was a comfortable pace, and enjoyed the views and the weather. The end of the race brought us back into the state park, and we ran the last mile along the ocean, so there were some scenic views there as well.

As I passed the 6 mile marker, the finish line came into sight, and soon thereafter I saw Jerry and Norah. Jerry was waving and holding Norah, who was smiling at every racer who went by her. Really, having them both there at the finish was one of the best feelings ever!

I crossed the finish line in 1:05:20. 20 seconds slower than I would have liked, but I honestly didn't mind. I ran a pretty consistent 10:25 pace, and if I hadn't done so much swerving in that first mile, I probably would have nailed that 1:05 goal. 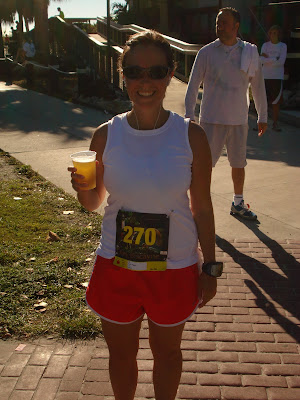 Yes, I grabbed a beer.

But, I didn't end up drinking too much of it. I guess beer at 9 am is just not for me. Who knew? So, I passed on the unfinished beer to Jerry and drank a water instead.

Afterward, I tended to those typical post-race needs (bathrooms, ditch the shoes, change shirts, etc) and by then, Norah had conked out. Jerry reported that she seemed to enjoy the whole race atmosphere and that she'd been busy watching all the people and smiling at all those who stopped to tell her how cute she was. They also took some time to go down to the beach so Jerry could dip her toes into the Atlantic, so she was pretty tired by the time we were ready to head out.

She slept in the car on the way home, and we decided to stop at Denny's for a big breakfast. She smiled at all the old people in Denny's while Jerry and I gorged on our Grand Slams, and then we all headed home.

All in all, it was a fun, scenic race for my first race back, and it was a great morning with my family!
Posted by Jess at 1:26 PM

Hey, that's a great job you did! Looks like the kiddo will grow accustomed to the race environment and hit the pavement with her mom!

Excellent job Jess! What a great way to spend a Saturday morning with the family. And how nice of Norah pitching in at just the right time to "lighten your load."

AWESOME JOB! Sounds like such a wonderful morning. I love that you have such an active life with a baby...it's really so inspiring! To have Norah grow up in that environment is really terrific and you should be so proud to keep it going with a baby!

Sounds like a great Saturday morning! Nice job on the run and glad to hear Norah seemed to like the race environment!

Hi! Congrats on your great race!

Congrats to the whole family for getting up so early. Excellent to get a race in so quickly post pregancy/birth. I am proud of you. Great work!

Congrats on a great first race back! Looks like it was a fun time.

Congratulations! You did great. That pic of Norah is so adorable. I love that 60 degrees is cold :) It was about 65 here in the Burgh and it's like a heat wave :)

Great race! And you can blame the 20 seconds on Norah sucking up some of your energy!

CONGRATS on the race! I had to laugh at the lady congratulating you for braving the cold! I went up to Vermont one summer with Rowen when he was little, and a guy at the grocery store told me he couldn't believe I brought the baby out in the heat. It was maybe 85 degrees, haha!

Congrats on your first race back! Sounds like everything turned out A-OK and I know how juggling the timing of nursing the baby and getting ready to go out for a run gets... I want a Grand Slam breakfast now.

so I came to your blog to tell you that your comment about Nutella looking like creamed poo cracked me up.....

But now I just have to tell you how impressed I am! You go girl!

Who knows where to download XRumer 5.0 Palladium?
Help, please. All recommend this program to effectively advertise on the Internet, this is the best program!

YOU DID GREAT! I love the pictures and you should be proud.

Congrats on a great race!! Sounds like you're back into running well already.

The shorts I'm planning to wear for my race tomorrow look like the same ones you wore - so hopefully they give me some of your speed!

Congrats on your return to racing. Looks like your whole family enjoyed the outing!!!

Congrats on your 10K! What a nice way to get back to racing. Sounds like you all had a great time. Norah, of course, looks adorable and happy!

Great job on the race! Sounds like it was the perfect day for a 10K.

nice race!!! wow--you're already back to racing ;) glad everything worked out so perfectly. I like your goals--I think it's good to have a nice range. btw, you're probably sick of hearing this but norah is sooooo cute!!

Sounds like you had a great first race post-baby. Nice time too!

Norah's smile is so cute. I want those cheeks!

great race, good for you.

Way to get right back at it. You are an inspiration for us mom-wanna be's. Running after baby and you have a beautiful daughter!

Great job Jess!! Norah is so very cute! I love seeing pictures of her.

Great job on the 10K Jess! Great pics as well!

Great job on the race! It's awesome that the whole family was able to get out with you.

Sounds like a perfect day! Congrats on your first post-baby race!

Congrats on your first race back! It sounds like a fun time and I'm glad Norah enjoyed it as much as you!

Congrats on your first race back! You astonish me! way to go!
~Katie B.

Yay for a great race! And I can't believe you couldn't drink that beer at 9 am! Shame! Hahaha! Great pace, too!
BTW, you are lookin' awesome!

Yeah! Way to meet your goal! How great that the fam was there to cheer you! Welcome back to racing!

Well done, and what a glorious little munchkin you have there.

When I finished my first sprint triathlon in September, I very nearly grabbed my 1-year-old from the sidelines and carried him across. Instead, I settled for post-race kisses.

Congrats on your race! Great pics, too (Norah is so adorable!). Beer at 9am is a stretch, but the pic is awesome! :)

Awesome job on the 10K! You've been doing great with the running since Norah's birth.

I used to love hanging out in Key Biscayne when lived in Miami. There was this hole-in-the-wall cuban window there that Jeremy and I would head to after a long run for cuban tostada and cafe con leche. Mmmm..

Great job on your race - and the pics are adorable as always :)

congrats!!! love that you are already out there racing away :)

Let's see... how long before Norah will be your running partner? Maybe another year... too bad you'll never get her to run the direction you want. :)

I took a break from blogging for a few months and am so thrilled to see your happy, healthy, beautiful Norah! Good job, Mama!

Congrats for getting back into the running game and doing so great. It won't be long before your little girl is running along beside you. I chased mine for a few blocks this morning (who knew 2.5 year olds could be so fast UP HILL??!). :)

Best wishes to you and your family!

You are looking great! Congrats on your race and introducing Norah to running races!!

It looks like all that pregnancy running you did gave Norah the running bug. How long before a mother-daughter race?