I like this picture. It seems as if she's thinking, "Seriously, Mom? Seriously?" 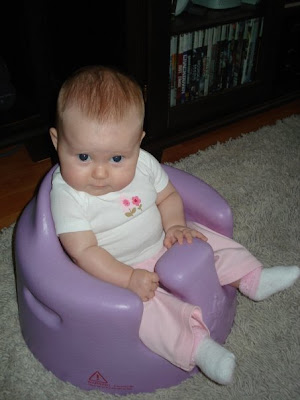 Norah had her 3 month check up today and here are her stats:

Both her height and weight are just slightly above average (both were 60th percentiles of some kind -- I don't remember exact numbers, percentiles don't mean much to me). In general, she continues to be a healthy girl, and is on track for her developmental milestones. So, really, there wasn't much to report from the doctor visit, which is good. She got two more vaccines, so two more shots that I couldn't bear to watch, but she just cried for a moment, and was a real trooper about them.

After her doctor appointment, Jerry and I had appointments to get our flu shots. I've never had a flu shot before, but it's recommended if you have a child under 6 months (since they can't get one), so I bit the bullet and took the needle in the arm. It wasn't so bad.

So it was a busy morning before dropping her off at DC and heading to work.

On the running front, I didn't run this morning even though I had originally intended to. I woke up with what I believe is a clogged milk duct, so I have a painful lump in my left breast, and I figured that running would probably aggravate that. I'm treating the clogged duct as best as I know how from what I've read (basically two principles: apply heat and pump or feed as often as possible), so I hope it un-clogs soon enough. It hurts.
Posted by Jess at 4:06 PM

I hope your clogged duct goes away fast, I am so freaked out about getting one, I hear they are terrible!

A couple of clogged duct suggestions:

1) massage it in the shower
2) change the angle when she's nursing - try holding her differently or kneeling over her while she nurses - this can change the way the suction is and pull the clog out. Email me if you want more details. BFing is something I know a lot about.

Yay for a healthy little girl!

Lily on the Road said...

Its a good news, not so comfy news post...hope your discomfort eases very soon and I'm glad to hear that Norah is healthy and raring to go...

She is adorable - great pic! And glad to see she is growing up just perfect!
Sorry about the boob thing - hope you feel better! :)

great pic! Sounds like a healthy little girl there!

Sorry to hear about the clogging. YOUCH!

LOL...She'll give you the same look (only including an eye-roll and a hair-flip) when she's 13.

Bummer about the soreness. Hope it goes away soon.

the percentages mean that she is above 60% of the population in height and weight...so that's good! she's normal! :) julianna has always been in the 90%-95% because she's always been freakishly tall.

I love putting captions w/ baby pictures! It's so much fun!

Sorry about the hurt "bubbie" (from Real Housewives of New jersey).

Adorable picture. Glad to hear the stats are good. As for the clogged booby...ouch. Mine ache just recalling how it used to be. MCM Mama hit the nail on the head, hot showers/compresses, rubbing, and mix it up.

MCM Mama knows what she is talking about. Changing the angle works great!! Mine never lasted more than a day or two so hopefully you will feel better tomorrow!!

My husband and I got our first flu shots this year too! We dont want to pass the flu around once we have a little one - before we just were willing to take the risk...

be careful - the heat sounds good. Massage it out. Don't get that mastitis stuff!!!

Do they make a grown up version of Norah's chair? Glad to hear her check up went well! Hope that clogged duct gets out before it drives you nuts!

Norah seems to be doing so well. My littlest is 25 months and just passed 19 lbs. He is in the 1 percentile for weight and 5th for height. Thus all the concern over he's cold/flu bouts.

The clogged duct. Ouch! Sounds like you are doing everything to work it out. If it lingers, see your doc. Nothing to mess with.

That pic is the best!

Picture would make my "Smile It's Hump Day" montage! That picture made me smile this week. :)

I bet Norah is the only one you'd take a bullet (shot) for. If it were Jerry the Flu would be in his future. I know how you avoid needles.

Glad Norah is healthy! What a cute picture! And sorry about the boob pain. That sounds really really unpleasant.

I had a clogged duct a few weeks ago - it totally sucked - but the suggestions from the lactation consultants at my hospital were to apply moist heat before nursing, nurse that side and try to either get baby to massage area, or massage the area yourself (working down toward the nipple) and then to apply cold after. After about 1/2 a day of doing those things, all of the sudden the pressure was suddenly released while Sam was nursing, and boy was it a relief! I hope yours unclogs quickly!
By the way, I have really been enjoying your blog! Think I found it when I googled "running and pregnancy"

That's a great expression on Norah's face! Happy to hear of another healthy check-up!

Hope your arm feels okay after the shot and that your duct clears up quikc. (Ouchie)

Norah is so very very cute!!!

Good Lord she is adorable.

Glad to read your all healed up. It sounds so painful.

No one made a "no one puts baby in ther corner" joke??