Lately, Jerry has been swamped at work; many days, he leaves for work shortly after 6 am, and he gets home just shy of the kids' bedtime.  He didn't get a weekend, and for about a week, it's felt as though he's out of town.
Hopefully, he gets a bit of a reprieve later this week, but when he's working this much, it makes me SO thankful for the treadmill at home.  Without it, fitting the runs in would be difficult.
And, without the running, there could be casualties.
Even with the treadmill, it's tough to get my desired daily mileage without him home.
So, I've been breaking runs up and often running half in the morning and half in the late afternoon or evening.
It's a sweatfest in the garage, but when I know I only have to run 2-3 miles at a time, it's not so bad to suffer in the stifling heat.
One thing's for sure, though: There's a huge difference in what I am capable of in the afternoon versus the morning.  In the morning, my legs aren't too enthusiastic, and the runs are almost always at my slowest pace.  The afternoons, by contrast, are when I can crank up the machine and, despite the heat, I always run the day's fastest miles then. 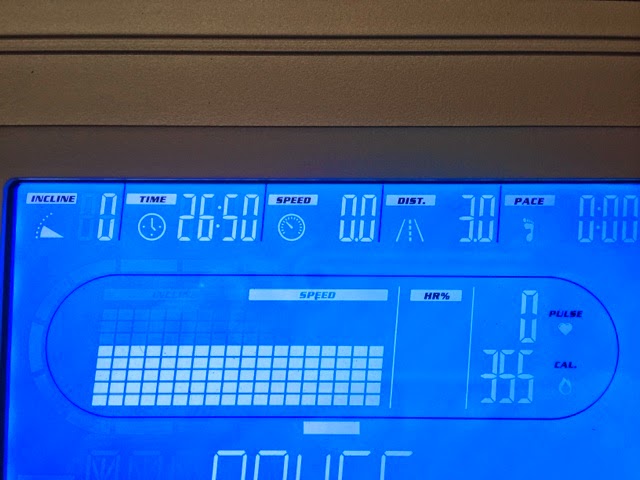 Still a far cry from what I've done in the past, but I'm hoping my ability to speed it up a bit on the treadie will help me with the evening 5k I have on the 26th when it's almost certainly going to feel hellish.
In the meantime, I'm looking forward to running outside one of these days.  Where I expect to be much slower.
Posted by Jess at 1:51 PM

Get those miles in any way you can! It has been super hot in Raleigh too this summer, and the humidity is killing me. Great job!

When it is super hot and humid I usually retreat to the treadmill! The good news is we're supposed to get a break in the weather after today and it will go back into the mid 80's for a few days!

Nice post. It is really interesting. Thanks for sharing the post!
Become popular using Digital Marketing Services in India.