The 3 day weekend was a busy one, and here's the breakdown of all the awesome time:

Saturday was actually a pretty run-of-the-mill Saturday: Mostly chores and errands, and for me, running.  But, Saturday night, we had a sitter, so Jerry and I went out to dinner and to Star Trek.  We'd been waiting to see the movie, and thankfully, it lived up to our expectations.  For anyone familiar with Star Trek, I'd describe it as "Wrath of Khan: Remixed"; for anyone unfamiliar with Trek, then I'd just say, "It's awesome: go see it."

Sunday, Norah and I went to a birthday party in the afternoon, and Jerry and Caleb stayed home since Caleb needs to nap then.  Norah had fun at the party and swam or slid on the water slide for about 2 hours.  She was spent that night. 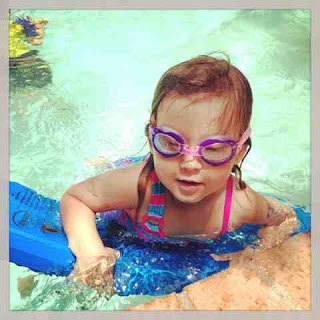 On Monday, we met some friends at a nearby water park, and the kids had fun swimming.  Unfortunately, it wasn't a hot enough day to really enjoy the side with all the spray stuff and water slides (that pool is freezing!), but Norah and Caleb didn't mind.  They love the zero-entry pool because it's so shallow that they can swim all over but have the comfort of being able to stand up in the majority of the pool.

During Caleb's nap, Norah and Jerry went to the cheap theater to see "The Croods" and I had a glooooorrrrrious nap!  (They reported that the movie was "okay."  Norah was mostly stoked about the snacks and the soda she got during the movie.)  After nap, we played some baseball in the back and Caleb did some "fishing." 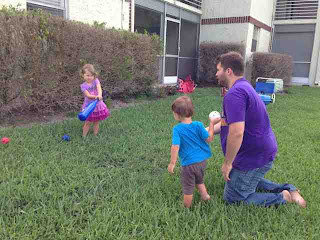 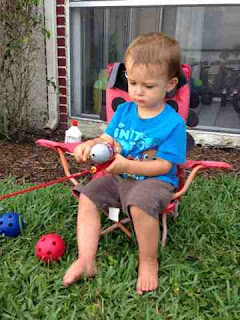 We grilled, drank some beer, and then had a family movie night.
Then, that was that.  Now, I guess, it's officially summer!
Posted by Jess at 7:27 PM

We're big fans of Benjamin Cumberbatch, and I've been wanting to see the new Star Trek. Glad to hear it's good. Sounds like an overall good weekend. Cheers!

Welcome to summertime. Let the lemon ale's flow and find some shade.

omg i am exhausted just reading all this!! looks like your summer is off to a fun and busy start!