Thursday morning, I kicked off my Thanksgiving in the same way I have for the past 7 consecutive years: At the Tukey Trot 5K.  It was, as always, a fun race, and I finished in 29:17, for an average 9:27/mile pace.  I was pretty happy with that -- one of my fastest Turkey Trots in the past few years, actually!  Jerry didn't get any "race" pictures, but he did snap this pic of Norah and her pal Miller "hanging around" during the race: 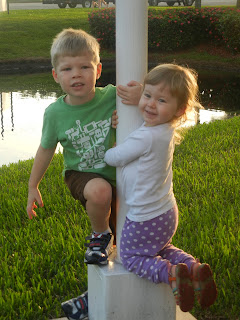 On Friday, we set up our Christmas tree and decorated the house for Christmas.  Norah is really digging the Christmas music this year.  Here she and Caleb are "dancing" to the tunes: 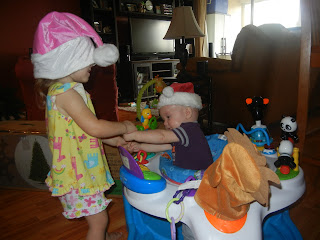 Below is Norah helping Jerry string lights.  She was very involved this year; no wonder it took us twice as long! 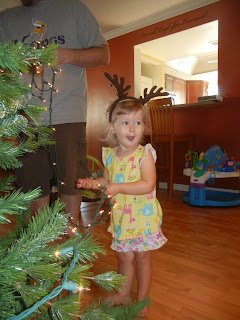 The ornaments have already taken a beating.  Jerry is currently running an "ornament ICU" where broken ornaments await their supergluing.  So far, as soon as a few are fixed and re-hung, a few more get the "Uh-oh!  What happened?" treatment. 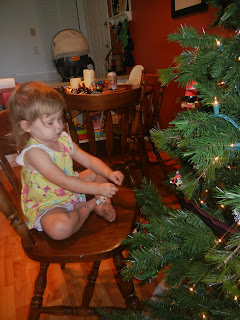 Friday was also our 6 year wedding anniversary and we had a nice night out: Went to dinner and then shopped some.  Sounds kind of lame if you don't have kids, but if you do have kids, you know how awesome a meal out and shopping without kiddos is!

On Saturday, we had some chores to take care of around the house, but in the evening, we went to a friend's house for dinner and playing, and today, we spent the morning at the park.  Here's Norah, Caleb and I on the slides: 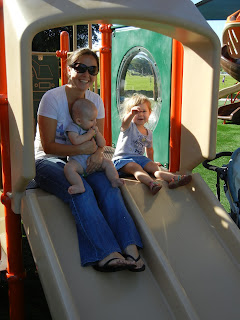 And here's Norah hitching a piggy-back ride from me: 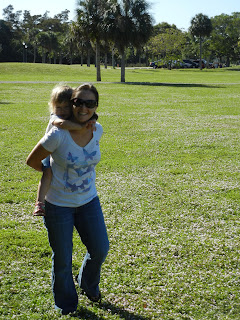 This afternoon, Norah and Jerry decorated their gingerbread houses.  Scooter managed to knock one down and eat it before decorating time, and one other one fell and broke, so they only had 3 houses to decorate, but Norah didn't know the difference.  Besides, she's really just about shoving as much candy in as she can; decorating is merely secondary. 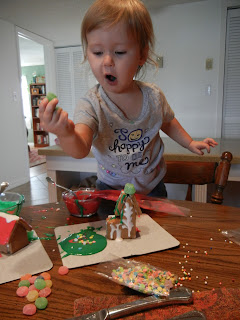 To cap off the weekend, the kids got in their Christmas jammies and did a mini-photo shoot in front of the tree.  We had our typical range of terrible pics -- Norah's finger in her nose, Caleb looking stoned -- and this one was the best of the bunch. 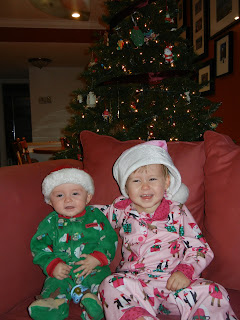 It's too bad that the only Christmas jammies in FL are fuzzy, fleece jammies since it's still 80 degrees outside.  Guess I just have to crank up the A/C and pretend that it's winter so these kids don't roast in their sleep!

Hope everyone else had a tubular Turkey weekend!
Posted by Jess at 8:25 PM

Congrats on the 5K time!

Oh my word!!! They are so adorable!!!
I totally get the dinner out and shopping...doing it alone is a piece of bliss!!! Happy anniversary and congrats on the race!

You had a fun filled weekend too. Love all the Christmas pics with Norah in action. The kids in their jammies is precious. There is just something about footie pj's that makes kids look so "snuggable."

We are holding off on putting up our tree because our cat always tries to eat it, then hurls all over the house.

great race and great family memories...looks like you had a fab weekend!

Looks like a pretty great weekend to me! Love all the festivities. Time to get ready for Christmas!

Congrats on the 5K!

The shot of Caleb and Norah in their pjs is great!

Great job on the Turkey Trot!! You give me hope!!

great race! and i love the decorations!! that's great you got some pics of the kids with the tree. it's hard enough to get that perfect pic with one kid--can't imagine two (or more!) happy holidays!!