It's been a busy few days -- a whole Halloween weekend!  Here's Norah "carving" her pumpkin: 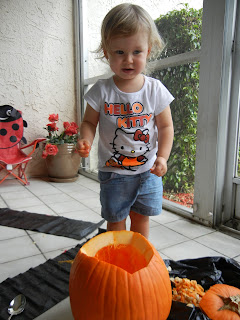 She really just helped scoop guts, but she highly enjoyed that part.  Jerry did the actual carving -- he's the arteest in the family -- but here are Norah, Caleb and I posing in front of Jerry's finished products: 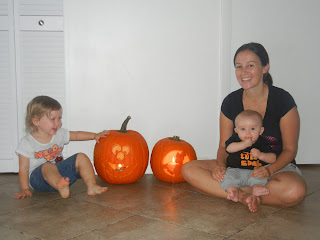 One is Elmo, and one is "The Princess and the Frog."  I think they were pretty dang nice -- nicer than the jack-o-lantern I'm capable of carving.

On Saturday, we attended a Halloween party, and here we are at the start:  Jerry and Caleb are "that guy" from "The Hangover," Norah is Jessie from Toy Story, and I'm, well, I'm just me. 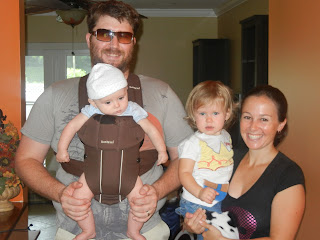 The Halloween party was a lot of fun, and the funniest part, for me, was Norah stripping down naked to run out in the rain and fetch a ball that had rolled out into the driveway.  She didn't want to get her costume wet, but she wanted to get that ball, dangit!  So, at 2 years old, my daughter is already "that naked girl" at Halloween parties...oy!...the teenage years are gonna be a bear!

And, lastly, here are the munchkins this evening before Trick-or-Treating: Jessie and Shrek. 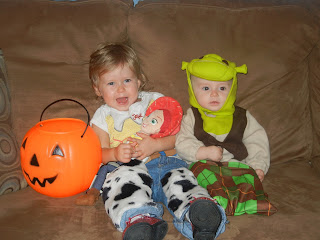 Before we went out, I asked Norah, "Now what do you say when people come to the door?"  Norah: "Suckers!"  Can 2 year olds make double entendres? :) 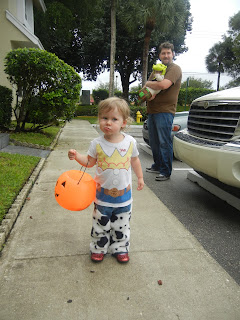 Norah enjoyed the trick or treating even though Jerry and I were a bit disappointed in our neighborhood's lack of Halloween cheer.  When I was a kid, trick or treating was a HUGE deal, but we've never really seen many trick or treaters here.  We must live in the wrong neighborhood.﻿  Still, like I said, Norah loved it, and at one point she declared: "More chocolate!"
We thought it was gonna be an awful night in terms of bedtime, but we limited the candy and only kept her up a wee bit past her normal bedtime, and she went to bed just as easily as any other night.  Phew!  I'm sure that in the years to come, it won't be this easy.
Anyway, I have been running as well (gotta even out my own candy-consumption), but reports on that later!  For now, I have papers that I'm not gonna get to.
Happy Halloween!
Posted by Jess at 7:15 PM

Halloween has really died off here over the years, too. The whole town used to be all decked out and now there are more and more houses that just keep the lights out.

times have changed. around here, more trick-or-treating happens at 'safe' places like the mall or at church, not walking dark neighborhoods. sad, really.

btw, we put candy out in a bowl for the kids in our neighborhood. so far only one carload has come by. :-(

OMG! So stinkin' cute! What a beautiful looking family Jess!

LMAO at "that naked girl" and "suckers".

Just finally got my kiddos to bed and am relaxing with a glass of nuun (gotta balance the wine and chocolate LOL).

I have to wonder if parents are now taking their kids to the Malls or Shopping Centers that have trick or treating on the weekend of or before Halloween instead of rambling around the neighborhood. I remember as a kid the streets were packed with kids; now we maybe get a half dozen or so groups and that is it.

Haha, suckers! She's right! Cute costumes. We had no trick or treaters at our house last night. I was kind of bummed. I actually had a bowl of suckers to give out!

I agree- we only had 17 trick or treaters last night and we live in a newer suburban neighbourhood where lots of kids live! I was shocked. Now I have to eat all this candy!

haha, those halloween costumes are so cute! And i'm with you, leave the pumpkin carving to the creative people. I suck at it.

LOVE the costumes! Jerry and Caleb are just perfect.

They are so adorable!!! Love the Hangover costume!!

I agree. House to house trick or treating seems to be on the decline. We had way less than in past years. It's nothing like the 300 kids we would get when I was growing up (I'm not kidding, we would make tally marks to keep track). We lived on THE street for trick or treating!

This post cracked me up on. Several occasions (suckers!?!! Hilarious!) I also love jerrys costume idea! That's a great one. Happy halloween!

Norah is a trip. I wish I would have seen the naked adventure outside but I did get to see her enter the house buck naked and run around asking for Ryan (Jerry wanted her to give him a wet hug). Glad the kids had fun (parties, pumpkin carving, trick or treating).

BTW, at the end of the night I didn't want tradition of costume switching to be solely handed to the kids. I put on a few other people's costume accessories and posed for a pic or two. Granted, I didn't fall down in the kitchen with a little fairy like in 2005...Oh, Norah is destined to be that girl! It's in her genes.

That couch picture of your cuties is going to be classic. So adorable!

so cute! I love their halloween shirts and costumes!