After Saturday Snotty Saturday, I made a pretty miraculous turn-around overnight and woke up feeling much better this morning. So, it seems it was just a 24-hour bug, and hopefully, this time, the congestion doesn't take 24-days to clear up! Anyhoo, since I was feeling better, and so was Jerry, we went out to breakfast and then took Norah to a local pool/water park for the morning. The park has two pools; one is a "splash zone" or some such named, pool which has all kinds of slides and water toys. The water was deeper in that one and the slides were a bit big for Norah. Still, she liked wading around waist-deep: 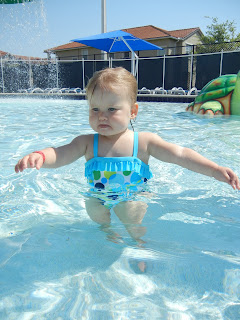 The other pool was a regular pool on one side, but had a "zero depth" entrance side where the pool gradually got deeper. That was nice for Norah, so she could wade in and sit in the water where it was shallow. 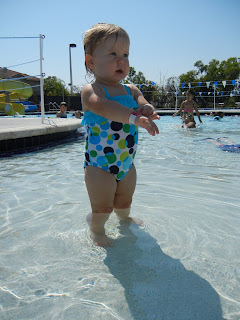 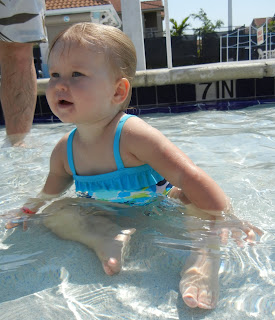 It was fun, but would probably be better in another year when she would be big enough for some of the slides, etc on the "splash zone" side. Right now, she's just not quite big enough for some of it. However, we still spent an hour or so there and the combination of sun and water did its job: Exhausted her, which is pretty much our primary goal on a daily basis, and she took a fabulous afternoon nap -- long enough that I got out and got a pedicure, came home and she was still sleeping! Nice.
Now, I have a pile of papers that I brought home this weekend and would really like to ignore, but I think I'd best get at least some of them read.
Posted by Jess at 5:48 PM

Sounds like a successful SUNday! I brought paperwork home to, but instead, I have playing playing around on The Knot and working on organizing/de-cluttering some things around the house. Must get it ready for SALE!

she is so cute! this looks so fun.

Looks like we all had the same ideas about beating the heat this weekend. :)

I cant wait to get Brooke back in the water. You guys are so luck to live in a climate where you can do that ;) We still have MONTHS!

Which park is that? Looks fun. We did chores all weekend-boring!

Score one for having time to squeeze in a pedicure! I love the super cute Norah pictures!

swimming outside already? NOT FAIR!!

Nora is such a cutie!!! Glad you are feeling better!

We had a sunny weekend too! Okay, so it was still below freezing - but the SUN! haha

Looks like a fun day, and awesome that you were able to enjoy a pedicure!

what a great SUNday, jess!
norah looks like she's having so much fun. and i think you're right - when she's a bit older, she'll be into the waterpark activities even more.
we have a splashpad/waterpark across from us, and i can't wait to take my nieces over there...but not now - southern ontario = we've still got snow!
hope you got some marking done!

I love that you can go swimming outdoors in march! Glad to hear you're feeling better. Sick & pregnant = misery